. . . around 5 summers ago, and I just got thinking about it recently. It all began when a friend, who was also a roommate and star of numerous blog posts, and I went to the My Morning Jacket show at the Taste of Randolph Street right here in Chicago. This was before the band got more popular, so believe it or not, the show really wasn't that crowded. What was a little annoying was the yuppies there, and there were lots of them - no surprise given the neighborhood - had their backs to the band and were carrying on conversations. Looking around, I was one of the only guys dancing and getting into the music. 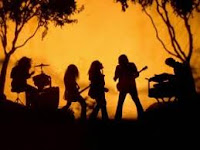 Well, regardless of the lackluster crowd, it was an amazing concert with the sun setting, making a beautiful backdrop behind the stage, and the Jacket was going all the way off - back when they all had long hair and did a lot of head banging. Roomy kept our beers full by sidestepping right to the front of the line, shooting one eyebrow up in the air like James Belushi, and smiling in the general direction of the people he was cutting off, and at 6'4" and nearly 300 pounds, nobody seemed to put up much of a fight.

Afterwords, he and I went to a house party that was in full swing by the time we got there, with the outdoor courtyard teaming with fun people in various stages of happy drunkenness. I remember commandeering the iPod and leading numerous sing-a-longs, mostly hair metal ballads, for some reason - Tesla's "Love Song" and Mr. Big's "The Next To Be With You" to name a few. Ladies all seem to love the latter for whatever reason, despite the fact that my interpretation has always been that the song is about some slut that half the band has nailed, and now the singer wants to have a go at her, but that's beside the point.

Later that night, one of the hosts of the party, a good looking female I had a thing for, was talking with me at length about I'm not sure what - but it was one of those conversations that seemed really important at the time. The pheromones were firing, eye contact was intense, and we started talking closer-and-closer, and I began to get a pretty good idea we would be kissing soon. It was one of those moments, and it was great. 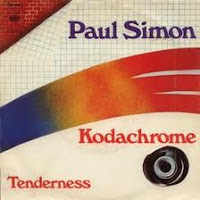 The party started winding down, almost everyone had gone home, but she and I didn't even notice. I remember she was a big fan of Paul Simon, and we were spinning multiple songs by him, singing along to fun summery Simon classics like "Kodachrome" and "Me and Julio Down By the Schoolyard," just feeling good. For whatever reason, we went for a long drunken walk through the city in the middle of the night - not the safest of activities, but we made it home, each in one piece, and it was then that we got to know each other a little more. With most of our clothes off.

It turns out we had strong feelings for one another, but for various reasons, we just never seemed to work out as a couple. There was a while where we would meet up after a random text and make out, and this went on about once or twice a year for a few years, but then we just lost touch.

It wasn't the best concert I ever saw, the best party I have ever attended, and she wasn't quite the love of my life, I guess, but all the different things that went on that night just made me feel incredible at a time when I rarely felt very good. The next day, jumping in a cab on my way home, I remember still feeling terrific.

Anyone else have an awesome night they would like to share? I hope you have had a night where you felt as good as I did on that Chicago summer night. We all should have a few nights like that before we die, right?
Posted by Dr. Kenneth Noisewater at 4:24 PM

Mine is nothing like that but I'd have to say when I went on Spring Break in 2008. I got invited to go down (to drive, of course)& another guy had brought his convertible. One evening as the sun was setting we just rode around a neighborhood, some of us sitting on the back, & just enjoyed the weather. The sunset. The music (John Mayer's "Say"). The company (that I would eventually be ditched by because that's my life). It just felt perfect.

And then I got sun raped the next day & another guy had to go to the hospital because he bit a hole through his lip.

Hmmmmm, that sounds like one of those trips that was awful at the time, but looking back on all the disasters is funnier than hell, right?

Here's wishing you 1,000 more nights that are comparable, if not BETTER than this night!

All the awesome nights I've had in the past, I can no longer remember, lol !

Oh man that night is just classic. You nailed all the details perfectly...I feel like I was there. As we get all old n stuff, it's like those times are pretty few and far between. Especially once coupled up, ESPECIALLY married with kids. Reminiscing helps though. Back in college I had the hots for my 18 year old sister's friend. One night we stayed out late getting coffee at some diner talking about a million things. He invited me over to his parents' house--it was like 1am or something. We ended up ravaging each other on his couch for hours. There was a thunderstorm outside. I left in the wee hours of the morning. We kissed each other on his doorstep with rain pelting our faces like some fucking John Hughes movie. I fell hard for this guy the following week while I was on a roadtrip with a friend through the Appalachians listening to Pink Floyd and Phish. When I returned, he was over it. And yet I spent the next two YEARS getting over it. Sometimes nights like that are just 'nights like that,' sometimes they have the craziest affect on you.
Anyway, great post.

Doctor doctor...hey I tried writing something but the comment box ate it...twice. So I'll write it up and post it in my blog...in the morning. i would do it now normally but today is MONDAY...and work sucks on monday. :)

My story is different than yours in many ways and you'll know as youread it. It's true...all of it.

Lynny: Thanks! You too, kid.

Heff: Yeah, they gave me 100 bucks to put it on the site, but that was a long time ago. I'm sure I can take it down now.

Miss Org: Wow. That's a helluva story on your end too. That would make a good post. Ravaging on a couch during a thunderstorm? Pretty hot, dude . . .

Zora: Sorry your comments got eaten up! Glad you enjoyed the read. : )

I don't have a favorite night but I do have a very favorite time in my life when everything was just so happy and right. When I was a junior in high school and living in Arizona. I was the new kid and to me it was just so cool to start over and meet people who had never known me before. I was the same person I was before, but no one at the new school had known me when I was younger so I seemed different and new. That makes no sense written out but it was just a pretty awesome time of my life.

My boyfriend was 22 and I was 15, which is illegal, I know, but he lived next door and I used to sneak out my window every night to go see him. At the time I thought he was the coolest. Looking back I see him for the loser he kind of was. It still doesn't change that being the happiest and best times.

hey mister. hehehe. I have put my story (reponseto yours) on my blog.

So you had the time of your life, eh? Great. But did you do the lift?

Radio: That sounds like some hot illegal action!! Haha.

Zora: I checked it out. 'Atta girl. Thanks for the link too!

Beck: Do you mean the lift like in Dirty Dancing? No. Sadly.

Happiest specific moment: finding out I got accepted to study abroad.

I can't think of THE best night, but One of my happiest nights: getting drunk with all my co-workers after hours at the place I worked in college. Everyone was in a good mood, no drama. A one time thing that never happened again and was the one night everyone got along.

'Donk: That's the power of alcohol. A social lubricant and it makes everyone like each other. Usually. Sometimes it makes people a little too honest. It's a balance.