I was walking near Lincoln Park in Chicago at around 11pm on a Wednesday with a special lady friend, and we saw a man coming out of the 7-Eleven with a newly purchased cup of coffee; he was talking, no, preaching to himself as he was walking. My ladyfriend seemed scared, but I reassured her that we'd be okay, as I know this guy to be totally harmless. Yes, he preaches insane messages that actually sound a little interesting, but while he talks loud enough to draw a crowd, he never looks anyone dead in the face, so there's no fear that he will try to lure you back to his poisoned Kool-Aid fun house of horrors. He appears to be around 50-years-old, and his long graying blond hair flows in the Chicago winds as he preaches to no one in particular. What's great too is that he never asks for money; he just wants to be heard, or not. Maybe he doesn't want to be heard because then he'd look you in the eye, but thank God he doesn't because I don't like when crazies look me directly in the eyes.

Now, there is a 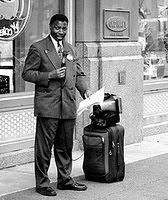 guy downtown who appears to be a Nation of Islam type black fella with a bow tie and a microphone, and I don't care for him as much because he just tells me all the things that will make me go to hell, such as homosexuality and cigarettes (luckily I've only dabbled with one of those). He was mentioned years ago in my old Chicago blogging crew, The Liars Club, in our 15 Chicagoans You Shouldn't Know post. Blond preacher guy kind of looks like Edgar Winter, he always preaches while he walks, never stopping with the walking or preaching, it seems, and his rants sound like they'd be kind of engaging if I was on his level of caffeine and schizophrenia. 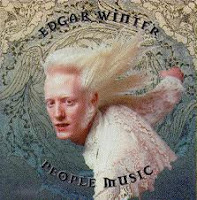 ext time I see this guy, I'm going to initiate some eye contact, buy him a coffee, and see what he's all about. What's the worst that can happen? Nah. I'll just keep looking away. It's just easier and safer than taking on a nut-job project like that. Screw it.
Posted by Dr. Kenneth Noisewater at 9:10 PM

The blond guy will be terrified if you make eye contact with him. He'll try to run away, but if you grab his arm he'll get down on his knees and kiss your feet. It's happened to me, believe me.

GB: Yes, I have a feeling that if I looked him in the eye, I'd mess up his universe. It's weird when you have a roving preacher like that because would if I really like what he's saying? Do I just follow him while he walks all over? Into the 7-Eleven even?

Hey doctor: never ever make eye contact. It's like a green light. They then think they have 'the okay' to do whatever to you.

example...was at an old folks home. I walked in with my sister. I told her...don't make eye contact, but she didn't listen. As we passed an old lady in the hallway...said said...help me...help me. My sister made eye contact and that was it...the old lady had her helping her to the restroom...etc.

That's what the old lady does to get attention. she really doesn't need to go to the restroom. we were there to see my neigbors/friend's mother.

That guy would have followed you home...when weirdo make eye contact with me I usually growl and they run away.

Blonde guy sounds a bit like he has schizophrenia or some other DSM disorder. I chalk up any odd behavior to that.

Tell us, oh wise Dr. Ken, which of cigarettes or homosexuality have you dabbled in? ;)

Aww I just adore the blong, schizo, preacher guy. Bless his cotton socks. I definitely think you should buy him lunch and sit and interview him. I’d pay to read that shit. Just make sure you have some pepper spray and a stun gun handy. You ‘should’ be fine!

I agree with spiky on this one.

Don't get a fear boner. I don't know if you watch The League or not but their episode last night kind of ties in with your post. Have a good one.

Andrew: It was the cigs. But, I did hear that homosexuality used to be in the DSM.

Candy: Yes. I want to preach with him; be his understudy.