some guy at work was joking around with me and asked, "what about your balls?"  to which i responded, "they're smooth as eggs."  he asked me what that is from because he knew it from somewhere - it was from a chappelle stand-up bit.  i got thinking about dave and how damn funny he is.  l.s.d. thinks i'm nuts because i will watch youtubes all day of anything with him in it.  just the other night, when i thought i had seen everything, i found some clips of him on the daily show, and i was thrilled.  i think pound-for-pound, he is the funniest man alive, and i just wish he would work again.


think about how many times you come across someone quoting something of his.  can you get through a day or two without that happening?  not a chance.  people quote stuff from seinfeld and simpsons all the time, but those shows have over 10 seasons; amazingly, chappelle's show was only 2 seasons.


i miss him like i miss friends i haven't seen in a while.  yup.  that sounds creepy for sure.  just seeing it typed, yeah . . . but i must admit that part of why i laugh so much is because he is so damn likeable.  when he starts laughing, you join in.


i know he loves getting out of the spotlight and raising his family, but you just know a creative genius type like that has loads of terrific ideas swimming around in that brain of his, just dying to get out and see the light of day.  until then, i guess i'll just keep watching old clips of him on conan, and oprah, and behind the actors studio, and . . . 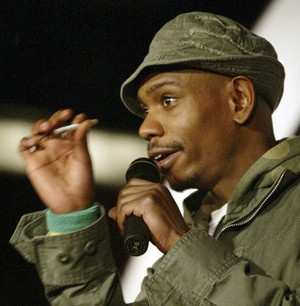 He did the 'Black Bush' spoof, didn't he? That was hilarious.

Love Dave. He lives not too far away from here. I keep meaning to get to his part of town and to see if I see him out.

gorilla, the black bush sketch was amazing. we r going to mars!

sybil, just dont say im rick james, bitch in front of his kids. he hates that.

This is one of those times when I don't even know what the hell you're talking about. And I fear I am a poorer man for it.