. . . on Christina Hendricks, the buxom redhead from TV's Mad Men. It's no secret that I like tall, confident, successful, ample bosomed beautiful women, and you need look no further than Gancey Girlfriend for evidence of this. 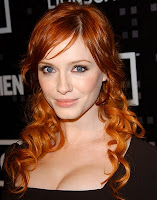 However, I haven't had a crush like this since we started dating, and I'm so, so thankful that my latest crush is on a woman on television and not someone in real life. However, sometimes it feels like a crush in grade school. I'll explain . . .

When she has a scene in the show, I get a little nervous, tweak my hair, sit up straight, and I get a little excited and nervous. What the hell is that all about? She's on the television, Dr. Ken! It's just a good thing she doesn't work in my office, that's all I"m saying, or I'd be a bumbling idiot. I'm just not nearly as smooth as Don Draper. She'd ask me if I wanted some coffee, and I'd mutter something about her big boobs and her milky white skin. Not smooth.
Posted by Dr. Kenneth Noisewater at 6:19 PM

awwwwwwwww...you like redheads with big boobs and milky white skin...!!

she's married to the guy in super troopers who eats the whole bag of shrooms.

Lyn: If he's a bumbling idiot around you after a few months still, that's a great sign, I think. I'm still always trying to impress my GF, and I think that's really good. When I start wearing fanny packs and sweat pants, she should start worrying.

Jov: She's married to some idiot in Super Troopers? At first I thought you meant Starship Troopers, and I was trying to remember a shroom scene. You know, Super Troopers just didn't do it for me, and Beer Fest was even crappier. I thought that first scene in ST when they pull the stoned guys over was funny, and then it just took a nose dive. Maybe I'm just too old for that one or something because when I was your age I loved The Stoned Age. Still do . . .

so what you're sayin is that it DOESN'T go away then? Crap!

It would be easier to count the number of people who DON'T have a crush on her. I have one too.

Props to ya, Brotha. That girl's got some million dollar cans !

Lyn: Oh, that's good if you're the bumbling idiot. It may not go away if he's a really hot dude. Good luck, bumbler!

yeah, the guy in the first scene who ends up licking the glass in the car. that's who gets to touch her.