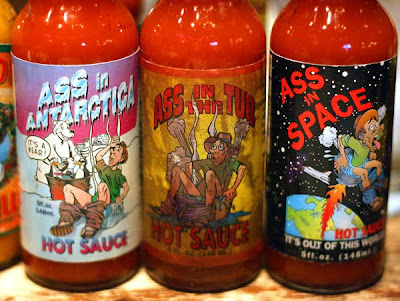 I have some friends who were in town here in Chicago, and they were very excited to be able to spend some time together with their son staying with his grandparents. Apparently, the night before we saw them, they met some friends at Heaven on Seven, a Cajun restaurant that boasts hundreds of hot sauces. They got a little crazy with sampling some of the hotter ones, and later that night, despite the fact that they had washed their hands numerous times, he burned his wife's "you know what" with his fingers.

Moral of the story? If you're going to be using lots of hot sauce, skip the foreplay.

Moral of the story number two? If the hot sauce has the word "ass" in the title, Set it down; Don't even look at it.
Posted by Dr. Kenneth Noisewater at 7:15 PM

This is very funny since it didn't happen to me.

I love that you have a moral of the story on this!

Hell, if ANYTHING has the word "ass" in the title, I leave it be !

Radio: I don't wish that upon anyone. I have two morals in case one doesn't do it for you. How are the marathons and running?

Heff-Man: Now, I can't believe that one. What about Metal Up Your Ass, the original title of Kill 'Em All?