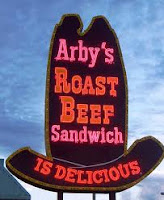 For some reason, I've been craving Arby's lately, and it's frustrating because there are none anywhere near me. I can't justify a trip to downtown Chicago or a remote suburb to buy a sack of sandwiches and maybe some curly fries.

Sometimes I randomly want to go to Chili's to get a burger and great big diet coke out of a mug. I like how they give you the steak knife to saw your burger in two. Again, they only have them downtown or in the burbs.

Bakers Square I like every now and again. I like free pie Wednesday where you get a slice of pie free with your meal. That's not too bad rinsed down with a cup of hot joe, but again, they're only in remote parts of the city. Luckily, I work most days out of the week near one, so finally that worked out.

How about Sonic? They have commercials on television all the time, I'd like to try it to have some chick roller skate out to my car with a tray of nachos like on "Happy Days," but there are zero in the city of Chicago - you have to go to the suburbs.

Why is this? Does Chicago, especially the Lakeview and Lincoln Park areas, think they are too cool for certain chain restaurants?

Does anyone ever crave something they were used to getting in their hometown and can't find nowadays? Anyone want to make a pilgrimage for curly fries?
Posted by Dr. Kenneth Noisewater at 2:39 PM

The little town I live in has a Goddamned McDonald's and NOTHING else, so I have to make a pilgrimage for EVERYTHING.

i wish western burger chains would make it out here. mcdonalds and bk give me stomach cramps but i ate carl's jr and in-n-out for a week with no problem

Heff: You have lots of pilgrimages to make! Fun, fun!

Jov: You miss the stomach discomfort, don't you?

There are no Sonic's near me and their commercials always made me want to try it so bad. On vacation last week we saw a Sonic and stopped. We shouldn't have. It is nothing special and the stuff we got wasn't even good at all.

Radio: Weird that the commercials air where you can't get it, but it worked on you because you tried it. I would have too.