Tales from the Rickshaw Volume 4: The Final Chapter?

I saw a fairly attractive girl's boobs pop out of her shirt the other night, and I was not at all turned on.

Allow me to explain. I was working a shift on the rickshaw/pedicab as the locals were growing increasingly intoxicated, and three females were crossing the street to the bar in which I was parked nearby. As the second drunkest one gets to the curb, she trips over it, knocking over the drunkest one to the ground, causing her shirt to get pulled down and her bare breasts to get pulled out of the top of her top.

This was what Jerry Seinfeld called in one of his episodes of Seinfeld, "bad naked" for at least three reasons:

1. She was horribly, horribly drunk.
2. She was possibly hurt.
3. And worst of all, she was crying. 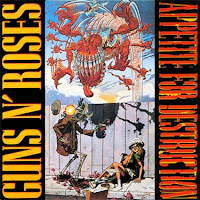 It kind of reminded me of that picture on the inside of the Appetite for Destruction album.

I got off my bike to make sure she was okay, and she did seem unhurt. However, I did advise her friends that they should take her home, which they didn't. Sure, pay no attention to me just because I'm carting around drunks on a bicycle. That's exactly why they should listen to me. I'm the sober man out there on those streets, giving me superpowers. I know them better than they know themselves. I know when boobies are going to pop out even before they know it. Actually, I don't quite know that much. That really would be a super power . . .
Posted by Dr. Kenneth Noisewater at 8:20 PM

It may have been a sad sight, but I probably STILL would've laughed and popped a chubb.